Further landward, the distribution, typology and composition, and relative position of trees to homes, productive assets, and fields can make an enormous difference to hazard exposure.

Many coastlines have naturally occurring belts of trees that absorb and redirect oncoming wind. These benefits have long been recognized by farmers and communities in coastal and other windswept areas, who have also been planting rows of trees for many centuries.

Science has helped design coastal shelterbelts that consist of multiple rows of trees, with the seaward (outer) rows consisting of bush and shrubs, the central rows of trees with a medium height, and the landward (inner) rows of trees with the greatest height. The protective benefit mainly stems from the redirection of airflows, reducing effective downwind speeds over an area 30-40 times the height of the tallest trees (Zhu 2008).

A 20-meter high shelter belt thus helps protect an area 600 meters in width, with the protection being greatest close to the shelterbelt (where wind speed is up to 60% lower than the initial speed).

One of the strengths of shelterbelts is that a multitude of local tree species can be used. Shelterbelts can thus be planted in most settings, provided that land is available. They can add protection where marine ecosystems cannot offer sufficient protective function. Depending on the design, shelterbelts can also offer numerous economic benefits (e.g. increase of yields) and are therefore often used in agroforestry.

Coastal communities are affected so greatly by tropical storms because out at sea, nothing stands in the way of the storm. Buildings, fields, assets, and infrastructure are exposed to the full wind speed and storm surge unless some barrier is in the way. The distribution, typology and composition, and relative position of trees to homes, productive assets, and fields can make an enormous difference to hazard exposure in terms of the wind load.

Planting of trees as windbreaks is a practice that has been around for centuries, and is a common practice in agroforestry to reduce erosion and increase yield. Trees planted in several rows reduce the wind speed on the downwind (leeward) side over a large area - up to 40 times the height of the trees (see figure A6.1: A Typical Dune System).

Analysis of aerial imagery taken in the Philippines after Typhoon Haiyan (2013) indicated that one factor on typhoon damage appeared to be the extent to which villages are protected by surrounding trees. During the recovery phase, new homes were built with a more sturdy design, capable to withstand wind speeds of up to 200 km/h. Yet, these are likely to still be damaged by wind speeds produced by a Haiyan-like typhoon (Haiyan generated speeds of up to 315 km/h). Rather than building even more wind-resistant houses - which is likely to be substantially more expensive - it may be more cost-effective to explore windbreaks as an option to reduce actual storm load on houses.

Shelterbelts have been planted for this purpose in Bangladesh (after Cyclone Sidr in 2009), in Myanmar (after Cyclone Nargis in 2008) and in Vietnam (since 1997). An exploration of this matter suggests that there is little information on the impact of these shelterbelts and on practical guidance. One paper gives a succinct overview of benefits and design considerations, although this is not specific to the various regional context. 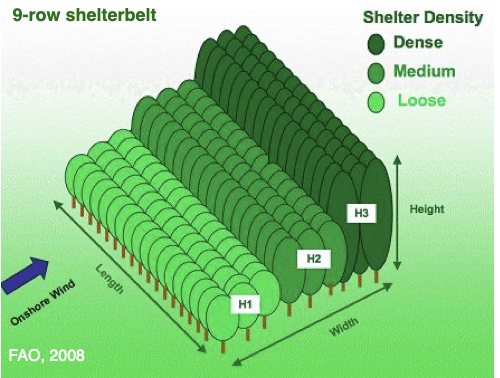 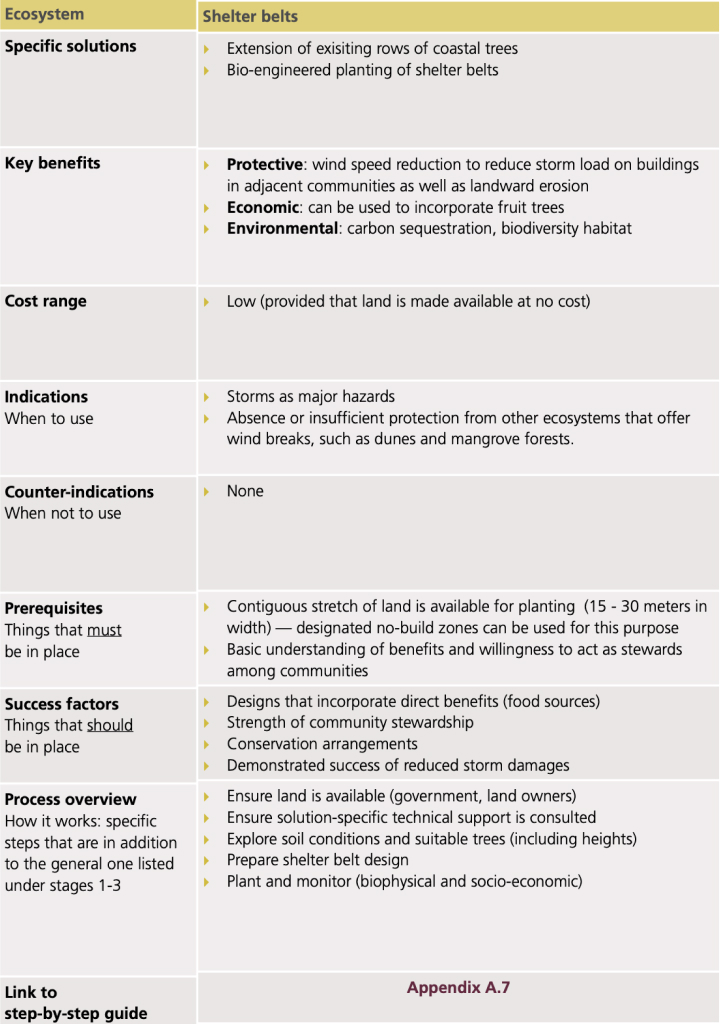