Coastal dunes act as a barrier against incoming waves and deflect wind and salt spray. The presence of a stable dune system provides a natural defense mechanism against wave inundation and erosion. However, dunes are dynamic ecosystems, with natural changes occurring during storm events.

In its natural state, a beach is backed by a frontal dune as well as hind dunes. Vegetation cover is an important part of the dune system, reducing wind velocity and encouraging windblown sand deposition. The frontal dune is usually more established and persistent despite being naturally impacted by storm waves. 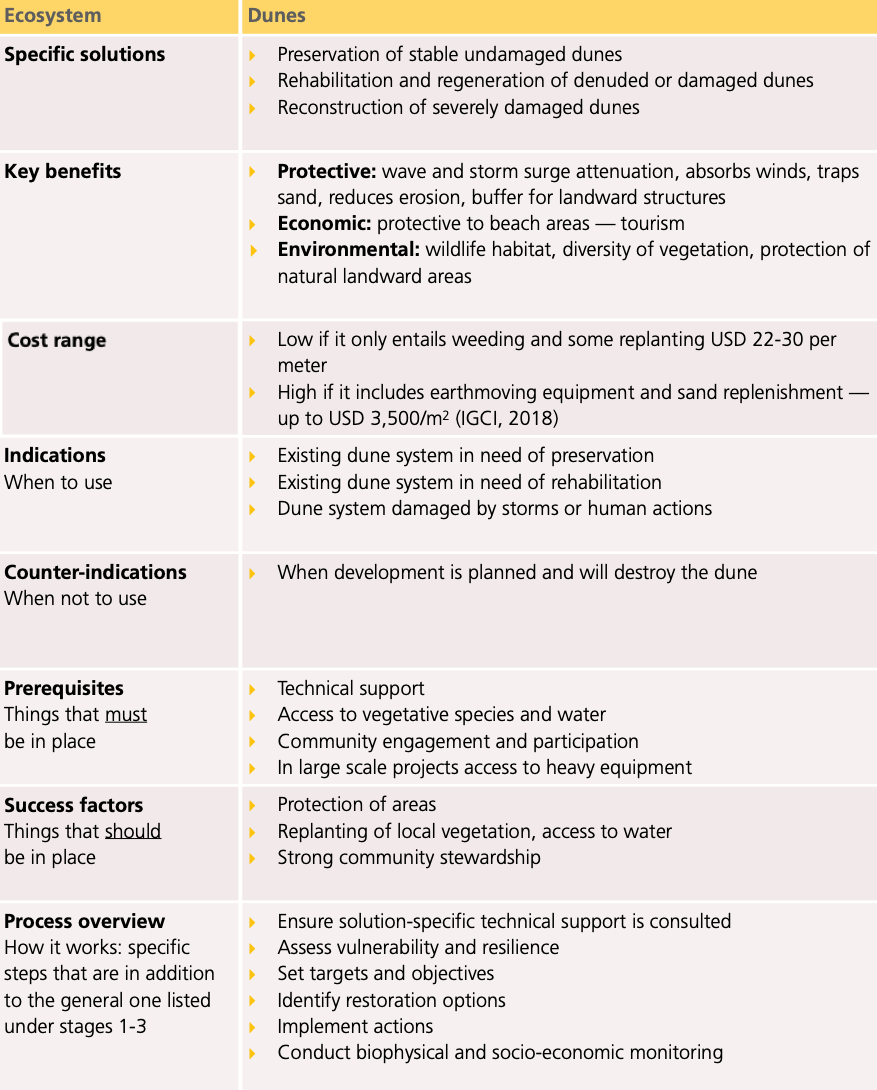 Coastal dunes often represent the last line of defense from ocean erosion. Dunes act as a barrier against inundation and deflect wind and salt spray. The presence of a stable dune system provides a natural defense mechanism against wave attack and erosion.

However, dunes are also a dynamic system with natural changes occurring usually during storm events, that sees extensive movements of sand leading to beach erosion, exposure of substrates, and inundation. These events can be quite extreme but need to be seen as natural events. Intact frontal dunes can mitigate the impact in terms of erosion-initiated losses.

In their natural state, many beaches are backed by a fore dune (frontal dune) and hind dunes. In many places, there is also an incident fore dune that is formed by windblown sand and colonized by grasses and creepers. Vegetation cover is an important part of the dune system, reducing wind velocity and encouraging windblown sand deposition (see figure A5.1).

Although most exposed to storms, the foredunes tend to be the most established and persistent components of the dune system. Their stability, shape and size is controlled by the vegetation cover. Woody shrubs are common on the seaward side, while larger trees are common landward. Vegetation species vary depending on location and context.

Without the stabilizing effect of vegetation, and through several adverse factors (introduction of weeds, human activity, storm waves, drought and even lightning-induced fires), sand drift can progressively cover natural and built environments. Many dunes are impacted by development; this inhibits the natural flows of the sand and the dune system.

Where buildings are constructed on top of the fore dune, there is a great risk that storm and wave action will undermine the area. Where seawalls have been constructed seaward of the frontal dune, sand behind the hind dune is separated from the system. This can lead to significant erosion, up to the complete loss of sand on the beach (Chan, H.T. & Baba, S., 2009: 5).